After the formal business of approving minutes, finances and committee reports the Clerk reported on the current issues of sewerage being discharged into the river at the cut by River Green. The Town Council had been made aware of the issue in August and reported it immediately to the Environment Agency who has investigated but so far taken no action. The Clerk now reported it to full Council for Council to take a decision on whether further action should be taken to push the Environment Agency Council for actual action. Members of Council expressed concern that 7 months had elapsed with no action.  It was agreed to write to the Environment Agency requesting urgent action, and to contact the local MP and the minister for the Environment. A member of the public raised concerns regarding the mooring of boats at the River Green. The Clerk referred to an agenda item later and provided back ground information as to the action the Town Council has taken to remove the boats and also details of the proposals for formal moorings and the work that the Council has done already towards bylaws and legal advice to allow policing of the area action to be taken to move on unauthorised mooring.

The meeting of the Planning and Environment Committee for March welcomed a number of residents who had attended to express theirs views and concerns regarding the change of use of the Buck PH car park into a chargeable parking lot. The main objections centred around the issue of the Buck PH being a listed building and the site being within the conservation area. The Council supported the resident’s views and raised strong objections to the bollards, signs impacting upon a listed building and conservation area plus the change of use having impact upon the viability of the PH as a community asset. The full objections identified the various national and local policies which this application contravened.

I was pleased to raise the Commonwealth Flag on River Green to mark Commonwealth Day on 9th March. The message this year was to acknowledge publicly the continuing aspiration of the Commonwealth to build on common traditions and uphold our shared valued of democracy, inclusive development and respect for diversity. We also raised the Canadian Flag at the Town Hall to mark our relationship with commonwealth partners in our twinning  with the Town of St Andrews in Canada.

Our social events at the Roxley Hall go from strength to strength with continuing support for the Dementia café, Luncheon club and Tea afternoon. I was pleased to be able to support the Dementia Club fund raising ‘Forget Me Not dance’ on Saturday 7th. The Roxley Hall full to capacity and dancing to 60s and 70s sounds provided by the O’Fenders, filled the dance floor all evening and a special Blues Brothers Tribute section was icing on the cake. Serving on the bar for the evening was a pleasure and the draft Wherry proved very popular. Thank you to Fiona and team for organising. With the tickets being a sell-out I look forward to a repeat performance. 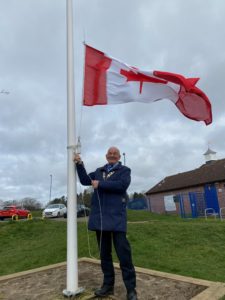